Indeed, this continent is filled with gems that would cater anyone with a severe case of wanderlust. However, mother nature is not only the best architect for beauty but also us, humans, have the creativity to create something fascinating.The castles in Europe mentioned in this article are some of the greatest human-made architectures anyone would have the opportunity to see and explore. Here are 10 beautiful castles that look like straight out of Disney movies.

Located in the brook valley of Peles, the namesake castle stands on a spot named Pietrele Arse (“The Burnt Stones”) and is one of the most famous royal residences in Romania.Legend has it that King Carol I spent a night in the town monastery and loved the wild landscape so much he decided to build a castle in the valley. Located in the Île-de-France region of France, the Palace of Versailles was initially intended to be a modest retreat from the chaos of Parisian life.The château quickly grew and splendor, eventually going on to become France’s center of political power and intrigue, as well as a playground for the aristocratic elite.Louis XIV and his wife Marie Antoinette famously held court at the palace until they were forced to flee the revolution in 1789. 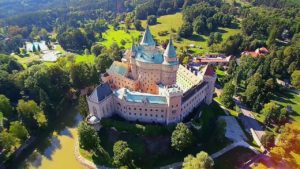 Often called “the gem of Bojnice,” this arguably beautiful Eastern European castle stands upon a large travertine monticule, and has passed through the hands of some of the most powerful Hungarian families since the 11th century Budapest architect J Hubert revamped the castle in the later 19th century, enhancing the Victorian attitude towards a romanticized version of the Middle Ages. 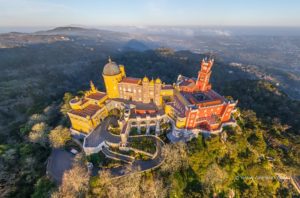 Arguably one of the most alluring attractions in Portugal, the Palacio Nacional da Pena is an outstanding example of the 19th century’s obsession with exoticized romantic architecture.With it’s a mixture of painted terraces, mythical statues, and ornate battlements, the palace is surrounded by a dense forest, giving it an otherworldly feel altogether. 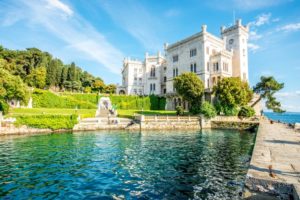 Containing most of its original furnishings and possessions, Italy’s Miramare Castle was commissioned by the Archduke Ferdinand Maximilian of Hapsburg in the latter half of the 19th century as a residence for himself and his wife, Charlotte of Belgium.Surrounded by a botanical park, with breathtaking panoramic views thanks to its position on a cliff overlooking the Gulf of Trieste, the castle is a luscious blend of Medieval, Renaissance, and Gothic styles. 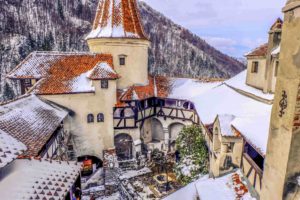 Though Bram Stoker never visited Romania in his lifetime, he had one source in mind while crafting Dracula’s castle. Situated along the border between Transylvania and Wallachia, construction for this iconic castle began in 1212 when the Teutonic Knights erected a wooden fortress intended to halt traffic at the entrance of the mountain pass, which at the time was heavily used by traders. 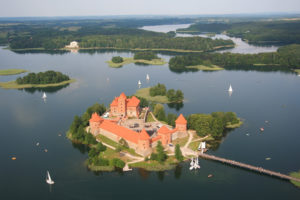 Located on an island in Trakai (“the town of lakes”), this picturesque 14th-century structure was one of the main centers of the Grand Duchy of Lithuania, later enjoyed as a summer residence. The castle has undergone several phases, with some demolitions followed by painstaking restorations. Today the castle consists of two: the original, situated on one side of the lake, and a second one, erected in later centuries, located in the middle of the lake. 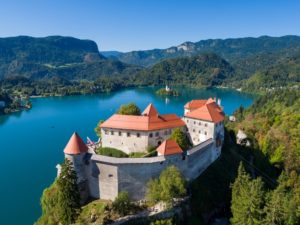 Bled Castle is a medieval castle built on a precipice above the city of Bled in Slovenia, overlooking Lake Bled. Lake Bled in Slovenia is gaining international attention for its picturesque beauty. It’s easy to see why—the crystal blue waters of an alpine lake, full of history, a resort-type feel, a famous island church, and a castle.While the island in the lake with its accompanying church is more iconic as a symbol of Lake Bled and Slovenia itself, Bled Castle, towering over the lake on a nearby cliff, is equally stunning. 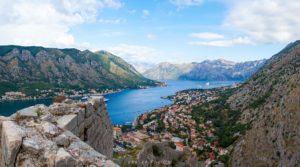 San Giovanni Castle, also known as St. John’s Castle, is situated high above the breathtaking Kotor Bay, and the charming old town of Kotor itself, in Montenegro. San Giovanni has been a fort since Byzantine rule and has a long and storied history. The castle has known Venetian conquerors, survived several earthquakes, was bombed by British forces, and was occupied during World War II. 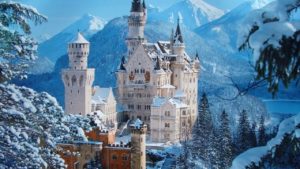 Neuschwanstein Castle, a famous castle in Europe, was opened to the public just seven weeks after the death of King Ludwig II in 1886.Since then become a popular destination for travelers who share the late king’s love of medieval romance.Dubbed “the castle of the fairy-tale king,” Neuschwanstein was built as a refuge from the prying outside world.Designed as a solitary place of retreat, the castle was not used for conducting royal business but for playing out dreamy pastimes, evident in everything from the Camelot-inspired wall art to the lush furnishings of the king’s many private quarters. 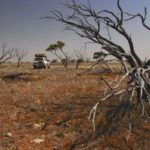 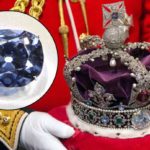