Through numerous years of science, archeology has unveiled many mysteries of our ancient history. From tombs to ancient scriptures many archeologists have found many man-made items, that even some of which seem to be very difficult to be made in their era. Although some people even challenged these things to be possessed by demons. Today we’ve brought you 10 mysterious archeological discoveries. 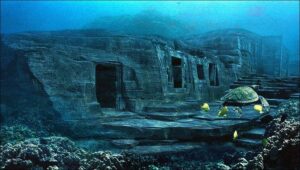 The Yonaguni monument or the underwater city of Yonaguni is a submerged rock formation off the coast of Yonaguni, the southernmost of the Ryukyu Islands, in Japan. A diving instructor Kihachiro Aratake found this complex by chance. In a report given to the 21st Pacific Science Congress in 2007, he revised this estimate and dated it to 2,000 to 3,000 years ago because the sea level then was close to current levels. He suggests that after construction, tectonic activity caused it to be submerged below sea level. 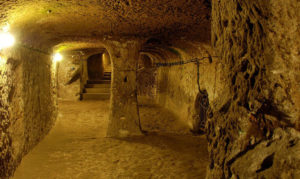 These tunnels are proof that the stone-age community was not only good hunters, but good architects also. Across Europe, there are thousands of underground tunnels from the north in Scotland leading down to the Mediterranean. These tunnels are believed to be spread across most of Europe. Some experts believe this 12000 years old network was a way of protecting man from predators while others suggest the idea that the linked tunnels were used like motorways are today. For people to travel safely regardless of wars or violence or even weather above ground. 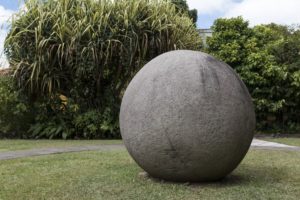 The stone spheres of Costa Rica is a collection of over three hundred petrospheres in Costa Rica. The unknown origin and purpose, and the mysterious shapes of these stones make one curious. While clearing a jungle from a banana plantation in 1930, people discovered these stones. These stones were thought to be having gold inside, but they came out empty when cracked open. 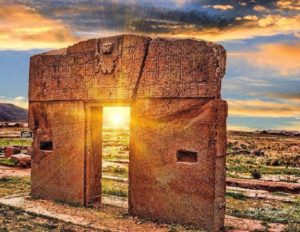 The Gate of the Sun is a megalithic solid stone arch or gateway constructed by the ancient Tiwanaku culture of Bolivia. It is located near Lake Titicaca at about 12,549.2 ft above sea level near La Paz, Bolivia. The object is approximately 9.8 ft tall and 13 ft wide and is constructed from a single piece of stone. The carvings on this gate could not be deciphered to date. And no one knows what secrets they hold. 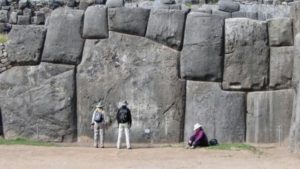 Saksaywaman or Saqsaywaman is an amazing architectonic complex and widely known as the historic capital of the Inca Empire. The site is renowned for its 19 feet tall stone structure that is more than 0.6 miles in length. The ancient temple complex is known for its impeccable stonework done without using any mortar. Believe it or not, the perfectness of that stonework doesn’t even let a thin piece of paper to pass through between the stones! 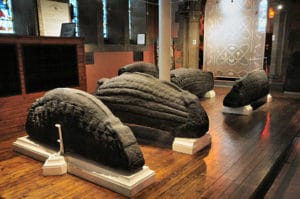 The Govan Stones are believed to have been created to honor the power and wealth of the rulers of the lost Kingdom of Strathclyde. Forty-five stones existed as late as the 1980s. However, in 2019, three of the stones were rediscovered in the churchyard by a 14-year-old volunteer who was partaking in his first archaeological dig. The Govan Heritage Trust is now extending its dig to find the rest of the lost stones. 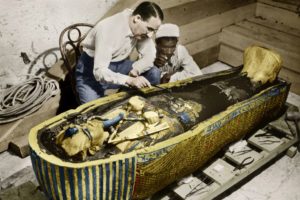 Discovered in 1922 by Howard Carter the nearly intact tomb of Tutankhamun and is one of the best discoveries till date. Tutankhamun came to power around 1332 B.C. at age 9 and died about nine years later. His unexpected death may explain why the boy pharaoh’s tomb appears to have been completed in a hurry. Microbes found on the wall of the tomb suggest that the paint on the walls wasn’t even dry when the tomb was sealed, archaeologists say. With over 5000 artifacts, it sparked a renewed public interest in ancient Egypt, for which Tutankhamun’s mask, now in the Egyptian Museum, remains a popular symbol. 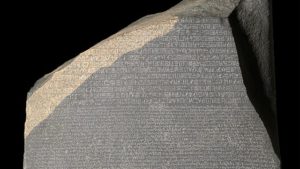 The Rosetta Stone is a granodiorite stele discovered in 1799 which is inscribed with three versions of a decree issued at Memphis, Egypt in 196 BC In 1822, Egyptologist Jean-François Champollion deciphered the hieroglyphs on the stone, enabling future interpretations of other texts written in the ancient Egyptian language and restoring the lost history and culture of ancient Egypt. But it was taken away from Egypt by Britishers. Since then it has been in British possession, though Egypt has long requested its return. 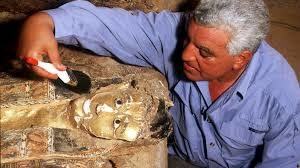 The Valley of the Golden Mummies is a large burial site at Bahariya Oasis in the Western Desert of Egypt, dating to the Greco-Roman era. Discovered in 1996 by Zahi Hawass and his Egyptian team, nearly two hundred fifty mummies about two thousand years old were recovered. Eventually, the excavator further estimated a total of more than ten thousand mummies. 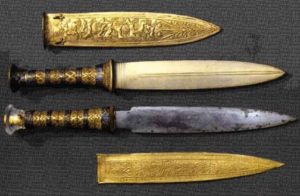 First discovered in 1925 in Tutankhamun’s 14th Century BC King’s Valley tomb by archaeologist Howard Carter, the iron dagger is of meteorite origin. Tutankhamun’s iron dagger closely correlates with meteoric structure, including homogeneity. A study using X-ray fluorescence (XRF) spectrometry determined that Tutankhamun’s dagger was made with iron containing nearly 11 percent nickel and traces of cobalt. a component of extraterrestrial iron is found in many of the iron meteorites that have rained down on Earth for billions of years. 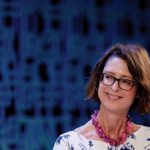 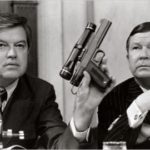